skip to main | skip to sidebar

Return to Peace Corps village delivers surprises, and a lesson 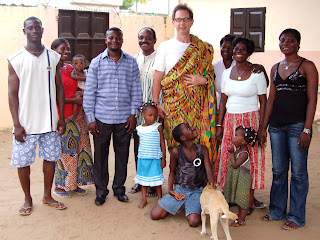 My Baguida family dressed me in kente
cloth to celebrate my return to the village.
BAGUIDA, Togo – Falling asleep to African drums and waking up to a torrential rain pounding on the roof, as I did last night, was like going back in time to my 20s, when I lived in this village for two years and my life was more tied to the movements of the sun, than to the movements of the hands of a clock.

I was an agriculture teacher in a secondary school and my job was to make things grow and to teach others to make things grow. At my school, I started a garden, a hog farm and a library. Outside of school, I had my own garden next to my house (and worked with students there) and I helped others start gardens and my prize student, Bada André Kokou, start a rabbit-raising project. The last time I was there, only a year after I had left, everything was working well. But that was 1986 – 23 years ago. Would there be any evidence left of of my two years of work?

Today was the day I was to find out, and I approached it with trepidation and excitement. It proved to be a day of surprises.

I was pretty sure the hog farm and the rabbit-raising project were gone. The school let the hog farm die in 1988, and André had to sell the rabbits when he went into political exile in Nigeria.

Yesterday afternoon, I went to the home of Kofi Mawusi, my former assistant headmaster, and his lovely wife, and had my first surprise. He reminded me that I had brought two grafted mango trees with me from the verdant hills of Kpalimé after I had spent six weeks in training there, and planted one of them in his courtyard and the other at the school.

He had to cut down this tree a few years ago because it had grown so large it was threatening one of their buildings. Madame Mawusi said that the mangos would drop on the roof of the house and make a terrible racket. But it provided their family with delicious fruit for many years. Was the other mango tree I planted at the school still there? They were not sure.

This morning I visited the school. As expected, the hog farm was gone. The school garden was gone. I asked to see the library and the “librarian,” if you can call him that, took me into a room of utter chaos, with books falling off the shelves onto the floor. I suppose some of the books I had ordered and had shipped from the U.S. might have been there but I did not trouble myself to look for them. I was angry that they could not have kept the library going; I considered the librarian a disgrace to the profession. Monsieur Mawusi told me the library was still intact when he retired as headmaster in 1995.

But the mango tree that I had forgotten still lived and was doing well. I was told that the tree provided both mangos for the children to eat and extra income for the school. I had a photo take of myself under my glorious mango tree. I went into one of the classrooms and talked to the schoolchildren. Monsieur Mawusi introduced me to them as the man who had planted the mango tree at the school. One of the male students told me how much he enjoyed eating those mangos.

As we walked around the village, I kept running into my former students and Monsieur Mawusi always reminded them that I was the one who planted the mango tree at the school. They always smiled broadly.

Then I found out that the rabbit-raising project was not dead. When André went into exile, he sold the rabbits to another student of mine. We visited that student’s home and we saw the rabbit project was alive and well, providing good income for his family.

We went to the house where I had lived for two years and where I had started a garden out of sand. Someone was still gardening there commercially. My garden lives on! As I was leaving, I ran into two people (now adults) who used to work with me in that garden when they were children. They told me they had fond memories of those times.

I also found out that a gardening project outside of the village that I had started with the U.S. Ambassador’s Self-Help Fund in 1985 is still going strong, with the same young man – now not-so-young – who had started it. He has become a commercial gardener. Again, I had completely forgotten about this aspect of my work and I was totally thrilled.

What have I learned from all this? I’m still absorbing it but I think it suggests that I was overly optimistic to rely on institutions to make a mark on my village. My institution – my school – let me down. I do not mean to say that institutions should be ignored. Indeed, I believe that one of the major challenges of development is figuring out a way to make institutions efficient and effective and serve the needs of their citizens.

But for me, my school did not make an important contribution to any formal success that I achieved during my Peace Corps service. It came from finding motivated people to work with outside of the school, helping provide resources to realize their dreams and turning them loose.

The exception was that glorious mango tree at my school which the institution managed not to kill. And the handful of 30-somethings who greeted me by name as I walked through the village -- they were my former students, and their beaming faces were my best reward. One of them is the village midwife and delivers all the babies. And for their smiles, I am grateful and blessed.

Here are my photos of my village on Facebook.
Posted by David J. Olson at 3:02 PM

David J. Olson
Takoma Park, Maryland, United States
David has +25 years of strategic communications, advocacy and nonprofit management experience that produced measurable results on five continents and in three languages. Managed development programs in Paraguay, Bangladesh, Zambia and Mali. Founded NGOs in Zambia and Paraguay that have become leading health programs and a grass-roots network in Mali that is still thriving. Played significant role in starting PSI programs in five countries which still account for a significant amount of PSI's total disability-adjusted life years worldwide (a measure of health impact). Advised and developed external relations capacity of African, Asian and Russian non-profits. Lectured widely on social marketing and media relations at major universities. Published more than 130 blogs, op-eds and articles since 2012 in a variety of publications and platforms.